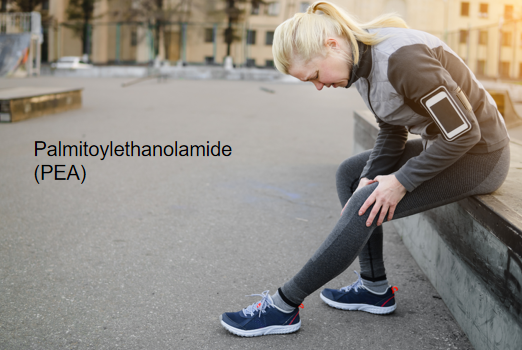 PEA is an endogenous fatty acid amide synthesized by microglia and mast cells, which naturally exists in humans, animals, and plants. PEA is believed to maintain homeostasis by mediating the regression of the inflammatory process, thereby controlling neuroinflammation, and helping to prevent and improve the symptoms of neurodegenerative diseases (such as Alzheimer’s disease). PEA has anti-inflammatory, analgesic, and neuroprotective properties.

In animals, the biosynthesis of PEA occurs through the hydrolysis of its direct phospholipid precursor, N‐palmitoyl‐phosphatidyl‐ethanolamine, by the action of N‐acyl‐phosphatidyl‐ethanolamine‐selective phospholipase D (NAPE‐PLD) (Okamoto et al., 2004) (Figure 1A). The degradation of PEA to palmitic acid and ethanolamine occurs by the action of two different hydrolytic enzymes, that is, fatty acid amide hydrolase (FAAH) (Cravatt et al., 1996) and, more specifically, N‐acylethanolamine‐hydrolyzing acid amidase (NAAA) (Ueda et al., 2001) (Figure 1A). Interestingly, the biosynthesis and degradation of PEA, as well as other N‐acylethanolamines, in plants, where these compounds exert quite different physiological functions, seem to occur via identical routes and often similar enzymes (Blancaflor et al., 2014). (Figure 3)

Neurodegenerative diseases such as Alzheimer’s disease (ad), Parkinson’s disease (PD), multiple sclerosis (MS) and amyotrophic lateral sclerosis (ALS) are characterized by gradual and selective neuronal cell death that causes the slow and progressive loss of one or more functions of the nervous system. Depending on the type of disease, neuronal damage can lead to cognitive deficits, dementia, behavioral disorders, motor abnormalities or paralysis.

The potential neuroprotective effects of PEA have been demonstrated in several experimental models of AD. In a mouse model, the s.c. administration of the compound reduced the behavioural impairments, lipid peroxidation, inducible NO synthase (iNOS) induction and caspase‐3 activation induced by i.c.v. injection of amyloid‐β 25‐35 (Aβ25‐35) peptide (D’Agostino et al., 2012). In addition, GW7647, an agonist of PPAR‐α, produced similar effects to PEA, whereas PEA did not protect against Aβ25‐35‐induced memory deficits in PPAR‐αKO mice (D’Agostino et al., 2012).

These findings, taken together, help identify the molecular mechanism through which PEA is able to modulate the altered expression of proteins associated with ad or PD and to down‐regulate activation of pro‐apoptotic markers and pro‐inflammatory factors, which lead to the loss of neurons in the cerebral cortex and hippocampus for ad or in the substantia nigra for PD. Thus, PPAR‐α emerged as the primary target for the neuroprotective effects of PEA in the central nervous system, and this evidence is supported by the use of PPAR‐α agonists and antagonists, which mimic or block PEA effects, respectively.

PEA also plays a protective role in neurological disorders caused by ischaemic stroke and traumatic brain injury (TBI). Ischaemic stroke is a condition characterized by reduced blood flow in the brain leading to limited oxygen supply and, as a result, the death of brain tissue. Depending on the region of the brain affected, a stroke can cause paralysis, speech impairment, and loss of memory. As previously described in patients with MS, it was observed that PEA levels also increased in the tissue surrounding the primary ischaemic lesion, in a patient with hemispheric stroke (Schabitz et al., 2002), as well as in the mouse cerebral cortex after focal cerebral ischemia (Franklin et al., 2003) (Table 2). Moreover, it was later reported that, in the blood of acute stroke patients, PEA levels significantly correlate with NIH stroke scale scores (Naccarato et al., 2010). In consideration of these findings, the neuroprotective potential of PEA has been investigated in ischaemic stroke experimental models. In particular, it was observed that when PEA was exogenously administered (i.p.) after transient middle cerebral artery occlusion (tMCAO), an animal model of acute stroke, it reduced infarct size in cortical and total infarct areas compared with controls (Schomacher et al., 2008; Ahmad et al., 2012a), blocked infiltration and activation of astrocytes, reduced pro‐inflammatory marker expression and amended neurobehavioral functions as determined by monitoring motor deficits (Ahmad et al., 2012a).

More recently, it was reported that the co‐ultraPEALut, at a lower dose compared with PEA alone, was able to produce the same neuroprotective effects after tMCAO (Caltagirone et al., 2016). Importantly, the administration of co‐ultraPEALut to a cohort of 250 stroke patients was able to improve all clinical indices (such as neurological status, the degree of spasticity, cognitive abilities, pain and independence in daily living activities) after 30 days of treatment (Caltagirone et al., 2016).

These studies suggest that the higher levels of PEA often associated with neurological impairments may represent an adaptive protective mechanism and that the exogenous administration of PEA, alone or in combination with luteolin, might provide a therapeutic alternative to counteract such impairments through as yet uninvestigated molecular mechanisms.

The first studies showing the ability of PEA to produce analgesia and anti‐nociceptive effects date back to 1998, when it was demonstrated that the local administration of PEA is able to inhibit nociception evoked in mice by intraplantar injection of formalin, acetic acid, kaolin, or magnesium sulfate (Calignano et al., 1998, 2001), as well as hyperalgesia following turpentine‐induced urinary bladder inflammation in the rat (Jaggar et al., 1998). The analgesia produced by PEA was thought to be mediated by peripheral CB2 receptors because it was reversed by administration of the CB2 receptor antagonist, SR144528 (Calignano et al., 1998, 2001; Farquhar‐Smith and Rice, 2001).

Later, PPAR‐α agonists were proposed as a new class of analgesics because GW7647 was found to be efficacious, like PEA, at reducing pain behaviors elicited in mice by intraplantar injection of formalin or magnesium sulfate, as well as hyperalgesia responses in the chronic constriction injury (CCI) model of neuropathic pain or in the complete Freund’s adjuvant and carrageenan models of inflammatory pain (Lo Verme et al., 2006; D’Agostino et al., 2009; Di Cesare Mannelli et al., 2013).

The analgesic properties of micronized and ultra‐micronized formulations of PEA, that is, m‐PEA and um‐PEA, respectively, were initially shown in a rat model of carrageenan‐induced inflammatory pain, where carrageenan‐induced paw oedema and thermal hyperalgesia were markedly and significantly reduced by oral treatment with either formulation (Impellizzeri et al., 2014). Later, clinical studies have demonstrated the efficacy of m‐PEA and um‐PEA, both when administered alone and in combination with the antioxidant stilbene, polydatin. In particular, it was shown that the administration of m‐PEA (300 mg p.o. twice daily) reduced pain scores in diabetic patients suffering from peripheral neuropathy (Schifilliti et al., 2014). Importantly, no alterations related to m‐PEA treatment were revealed from hematological and urine analyses, and no adverse events were observed (Schifilliti et al., 2014). In summary, these findings suggest that PEA, alone or in combination with polydatin, represents a new promising and well‐tolerated therapeutic strategy for the management of chronic pain in different pathological conditions.

The anti‐inflammatory effects of PEA seem to be mainly related to its ability to modulate mast cell activation and degranulation, and this action is also known as the ALIA (autacoid local inflammation antagonism) mechanism (Aloe et al., 1993; Facci et al., 1995). The first evidence of the anti‐inflammatory effects of PEA in animal models was reported by Mazzari et al. (1996), who demonstrated that orally administered PEA is able to decrease the amount of degranulated mast cells and plasma extravasation induced by substance P injection in the mouse ear pinna (Mazzari et al., 1996).

PEA is available as a supplement in tablets, powder, capsules, and so on.

PEA is a poorly water‐soluble substance and as such the dissolution rate is often the rate‐limiting step for oral absorption and bioavailability. Dissolution rate is influenced by, among other factors, particle size, and therefore drug substances are usually micronized in order to achieve a more rapid dissolution.

Preclinical and human studies have shown that PEA，especially when micronized with antioxidants such as luteolin and polydatin, in the form of micronized or ultra-micronized, is a therapeutic tool with great potential to effectively treat different pathologies characterized by neurodegeneration, (nerve) inflammation, and pain

In brief, the process of micronization results in smaller particles and hence a larger total surface area. This allows the gastrointestinal milieu more access to free surfaces on the drug particle and hence a faster dissolution can be achieved. This may lead to better adsorption of the drug molecules 46. There is a report in rodents that orally administered micronized and ultra micronized PEA are more efficacious than unmicronized PEA in the carrageenan model of inflammatory pain 47. However, in that study, the formulations of PEA were dissolved in carboxymethylcellulose prior to oral or intraperitoneal administration, i.e. already in solution, which would be expected to bypass the contribution of the micronization. Head‐to‐head comparisons of the different formulations of PEA in humans are lacking, and thus there is no clinical data yet to support the use of one formulation over another, which is an unsatisfactory state of affairs.

In 1975, Czech physicians described the results of a clinical trial[clarification needed] looking at joint pain, where the analgesic action of aspirin versus PEA was tested; both drugs were reported to enhance joint movements and decrease pain.[14]

In 1970 the drug manufacturer Spofa in Czechoslovakia introduced Impulsin, a tablet dose of PEA, for the treatment and prophylaxis of influenza and other respiratory infections.

In Spain, the company Almirall introduced Palmidrol in tablet and suspension forms in 1976, for the same indications

PEA is currently marketed for veterinary use (skin conditions, Redonyl™, [Innovet]) and as a nutraceutical in humans (Normast™, Pelvilen™ [Epitech]), PeaPure™ [JP Russel Science Ltd]) in some European countries (e.g. Italy, Spain; it is sold as a food supplement in other countries, such as the Netherlands). It also is a constituent of a cream (Physiogel AI™, Stiefel) marketed for dry skin.

Since 2008, PEA has been marketed as a food for special medical purposes in Italy and Spain, under the brand name Normast (Epitech Srl). Recently, a food supplement named PeaPure was introduced (JP Russell Science Ltd.).

It is sold as a food supplement in other countries, such as the Netherlands). It also is a constituent of a cream (Physiogel AI™, Stiefel) marketed for dry skin.

In the USA, PEA is under evaluation as a nutraceutical for inflammatory bowel syndrome (proposed brand name Recoclix, CM&D Pharma Ltd.; Nestlé).

Effepharm’s R&D team is constantly committed to the research and development of new ingredients, in early 2021 successfully developed PEA powder, the current monthly production capacity of 20 tons, is further expanding.

Effepharm is proud of its all-star R&D team. All the members are extremely experienced, most of whom came from top pharmaceutical companies like GSK, food companies like Mars Wrigley, and medicines and foods standard-setting organizations like USP.

We’re professional not only in the research, development, and process of manufacturing but also in the quality assurance of food ingredients. Our study covers lab testing, manufacturing, safety, and efficacy research on animals and humans.

Our dedicated team of employees is passionate about helping customers all over the world to use the highest quality ingredients with innovative technologies. Effepharm can provide full series of specifications for your choice, including common palmitoylethanolamide (PEA) powder, ultra micronized PEA powder, micronized PEA granular.

We implement the principle that Quality based Design: that is, from product concept to industrialization, careful design, a thorough understanding of the relationship between product attributes, production process, and product performance

Product quality should be considered from the beginning of research and development, including product design and development, production process route selection, and determination. This is why Effepharm can be one of the top companies in this industry.

For PEA, Our R&D team is also constantly optimizing and improving the bioavailability of PEA through the company’s IDS technology (ingredients delivery system). We believe that our partners can continuously enjoy better PEA raw materials and better services provided by Effepharm.

Looking forward to our cooperation!!!